Anatolia has witnessed many migrations and has been home to a variety of civilizations. The increasing availability of ancient DNA samples from different periods and cultures makes it now possible to examine the genetic changes that have taken place in Anatolia since the Neolithic. The ancient DNA revolution has already dispelled many myths, but myths and legends die hard. Some of the more persistent ones concern the impact of the last migration wave to hit Anatolia, marked by the arrival of the Oghuz Turks. While the Oghuz’ cultural impact is undeniable, the significance of their genetic legacy is still contested by some. Although there are still some missing links in the DNA record, the available evidence allows us to put the “no true Turkmen fallacy” to the test. 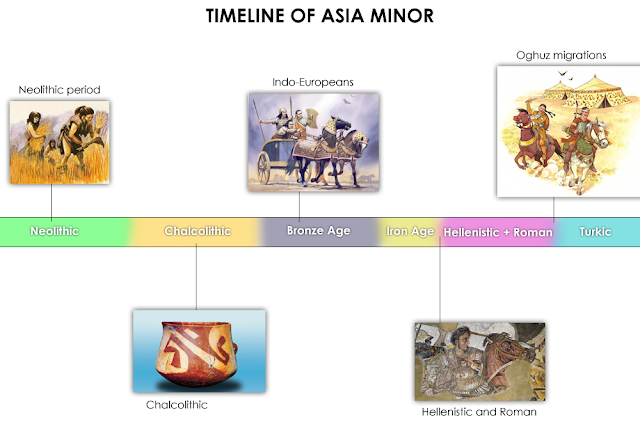 Due to its inclusion of hunter-gatherer and farmer related components, I’ve thought it would be appropriate to start with the puntDNAL K12 calculator.

Neolithic to Chalcolitic transition: We see a dramatic decrease in the Anatolian_Neolithic component in the Chalcolithic sample, and an increase in the Caucasus_HG component. This change seems to be caused by a large-scale migration of people heavy in Caucasus_HG/Iran_N ancestry.

Chalcolithic to Bronze Age transition: The low quality of this sample causes the admixture results to be quite noisy, but an increase in the Near_East component can be observed. Lazaridis 2016 determined that the Bronze Age sample can be best modelled as a three-way mix of 62% Anatolia_N + 32% CHG + 6% Levant_N.

If we assume that our modern-day Cappadocian Greek average is representative of the genetic profile of Cappadocian Greeks during the times of the Byzantine Empire, then we can conclude that the Oghuz migrations, which started in the 11th century and continued for hundreds of years, had a significant impact on the genetic structure of Anatolia.

The differences we observe between our samples of Cappadocian Greeks and Cappadocian Turks allows us to gain some insights into the genetic profile of the incoming Oghuz Turks:

Let’s add a couple of samples from the south of the Aral Sea. 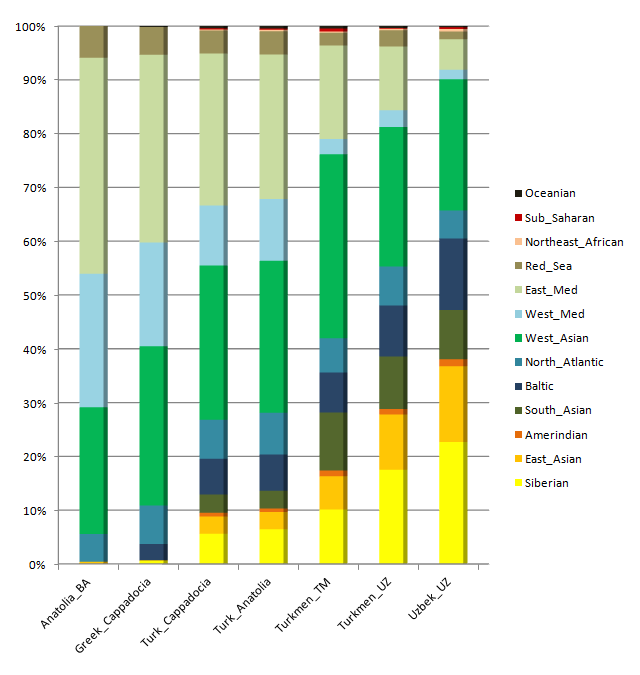 We can take a look at the closest populations for some of our sample averages with the help of the 4-Ancestors Oracle. The numbers to the right of the population names (@ x) are least-squares distances, the smaller the numbers the closer the populations are to each other. A distance greater than 10 cannot be considered close.

In light of all this data, we can conclude that during the long time span from the Neolithic to the Oghuz migrations the genetic structure of Anatolia underwent successive transformations, and that the last big change was caused by the Oghuz migrations.